South Korean consumer electronics heavyweight, LG have wrapped off the covers from a scintillating piece of Television. The company has made a TV prototype which is as slim as a paper, an 18-inch foldable television panel that has the ability to be curved just like a newspaper. 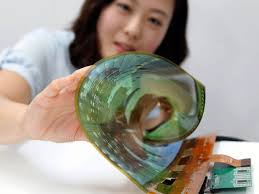 This TV is a transparent Organic LED (OLED) display glass with nearly 1 million megapixels and a resolution of 1200 x 810. It can be bended up into a 2.4-inch diameter cylinder without damaging its HD display screen.

According to the LG statement, it has employed polyimide film rather than using traditional plastic for the backbone of the panel. As a result of this, this material absolutely squeezed the bulkiness of the screen and hands it the elasticity required to shrink into a cylinder.

LG also unveiled a transparent screen that has a precisely sharper image quality in contrast to the current see-through LCD displays.
LG also claimed that it is capable of yielding a massive 60-inch UHD, transparent curved display TV by 2017.

Earlier this year, at the eve of CES, LG has already unleashed a plethora of amazing flexible TV technologies. It now competes with the likes of other leading manufacturers such as Samsung and Nokia, who are generating increasingly bendable display screens.