Nokia to introduce its first ever Windows RT 8.1 tablet

Nokia is at the verge of introducing its first ever Windows RT 8.1 tablet and the device will be marked as the company’s inaugural Windows RT tablet. This upcoming device, known as the Lumia 2520, will be going in the battle field with Microsoft’s own Surface 2 Windows RT tablet. Microsoft recently bought Nokia’s devices and services division, so this fight might look a bit weird to users. 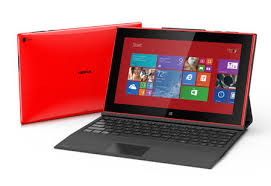 Meanwhile a bit prejudiced, Qualcomm believes Nokia’s Lumia 2520 tablet has a decisive edge over the Surface 2, from processor speed to graphics, video playback and wireless connectivity.

It is worth to mention that the Surface 2 has been loaded with Nvidia’s chip under the hood and Nokia Lumia 2520 comes with a Qualcomm chip. “The performance on [the 2520] is impressive. It’s really the start of the next level. It has got no parallel, not even with Surface 2 … In every field of performance, it’s much more gigantic, faster, and power conscious,” Qualcomm’s senior VP of product management, Raj Talluri, said in a note.

The Surface 2 is equipped with a Nvidia Tegra 4 chip clocked at 1.7 GHz while the Nokia Lumia 2520 comes with even a more faster 2.2GHz Qualcomm Snapdragon 800 chip.

Qualcomm has been going at a steady pace with the run of Microsoft’s Windows RT platform. “We have a focused and longer term view on these new technologies. The RT of today may not be valid for tomorrow. But our vision of a device is that we want to produce a gadget that’s both your entertainment and productivity device that you want to carry with you wherever you want to. We eye on longer term investment,” Talluri stated.

Qualcomm is the only firm left behind to pledge their support for Microsoft controversial Windows RT platform, after other tech giants like Dell, Samsung, Toshiba, and HP jumped off the Windows RT caravan.