The entertainment apps and mobile games have become a lucrative market for Pakistani developers. The mobile apps has a huge customer base in country and over the last couple of years Pakistani games have gain immense visibility in software developers industry.

Suarez Bit Me is another hit by Pakistani Game Studio (DreamWorld Technologies). The game is based on recent incident during a FIFA Worldcup 2014 match when Suarez bit his opponent . The game can be downloaded freely from following this link. 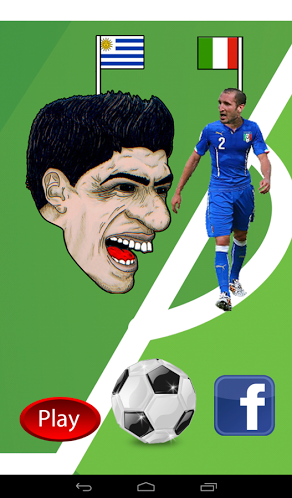 This game is a fun and addictive game, and is aimed towards players of all ages. “Suarez Bit Me” is based on the real life incident of a famous football player by the name of Luis Suarez who recently bit his opponent Chiellini during a FIFA WorldCup 2014 match and received a ban of 4 months. The developers have added a very funny touch to the game making it super interesting and fun to play. The game is absolutely free to download for anyone who has an Android device.

You are playing as Suarez, the football player from Uruguay. And you are as hungry as an animal! You just can’t control your hunger any more. You want to bite off any piece of flesh or meat that comes in your way. So now is your big chance! Your hunger is forcing you to bite any FIFA football player who comes near you. How many opponents can you bite? How are you going to save yourself from being banned? But be very careful on your biting spree, you don’t want to bite the referee! Or else…

The game features animated characters of Suarez, Chiellini and the Referee. The player must bite as many opponents as possible. The player is dead hungry, and he will be given a Red card by the referee every time he bites an opponent, but he must still continue on his biting spree. At the same time, he must avoid biting the referee because then he will be banned permanently and the game will be over. How much can you score? Well let’s see what you got.

And the best part, the game also features Sharing with your Friends on Facebook!!