October 18, 2012 qasim56 - no comments
Share
The use of tablet PC’s / ipads has tremendously increased over the last one year and it is predicted that in the next 5 years ipads will completely takeover the laptops. The Apple has been the leader in Ipad makers followed by Samsung, Dell, Motrolla,Asus and kindle. The Apple’s ipad1,ipad2 and now ipad 3 as well as Samsungs Galaxy Tab, Motorola XOOM and Dell streak 7 have revolutionized the tablet PC’s/ ipad’s industry. 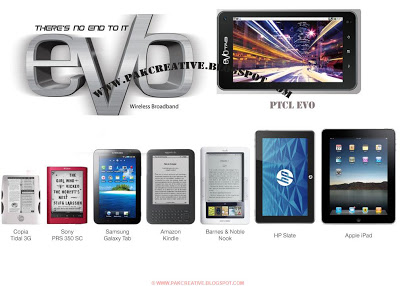 The Tablet PC’s are normally very costly in Pakistan but Pakistan telecommunication (PTCL) introduced its first ipad in an affordable price in August 14, 2011.The good part of it is that it’s an Android tablet. It provides Broad band internet services on the go. Initially its price was approximately Rs 28000/- with some months free internet package but recently on 16 October, 2012 PTCL announced sale of EVO tab on through away price of just Rs 12000/- with 3 months of unlimited internet package.It also merits attention that PTCL Evo Tab supports GSM networks means that you can use it as a cellular mobile phone.However if you are not comfortable with its bigger size as compared to normal cell phone a Bluetooth can be used for voice calling as added support. 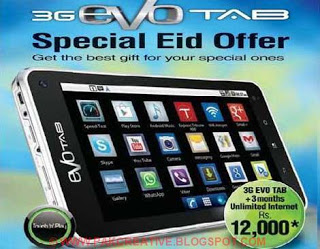 Earlier the package was too costly, Here is the old AD

The original manufacture of EVO tab is not disclosed but it is thought of one of the variant of indonasian made IVIO twilight 7 which is ownned by an indonasian company PT.intersys.
Although PTCL Evo tab is much cheaper than its competitors in the market but never the less in such a cheap price it has almost all the functions what you need in a Tablet PC. So why to go for costly ipads or touch screen mobile phones when EVO tab has every thing you need.
Here is a comparison of PTCL Evo Tab with other Tablet Pc’s:- 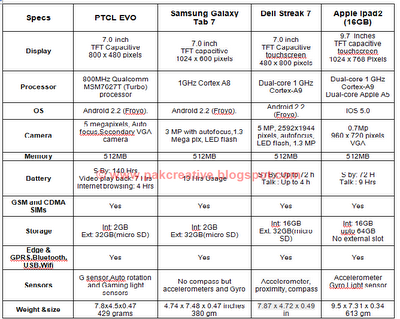 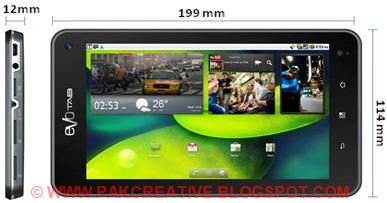 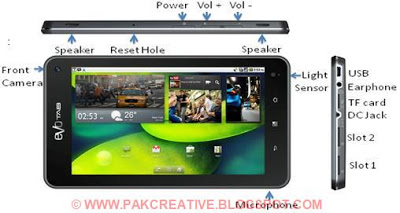