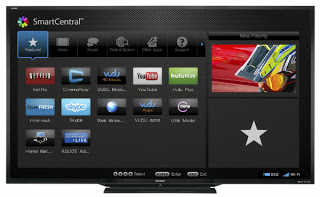 Sharp launched the largest LED TV on the planet the 90-inch AQUOS with 3D technology  at an event in New York City on Monday.Standing nearly four feet tall and spanning more than six-and-a-half feet in width, the screen is big enough to rest about 56 iPads on its surface. It weighs in at a lean 141 pounds (without a stand) and is less than five inches deep.
“It’s nearly three-times the viewing area of a 55-inch television,” a Sharp spokesperson told the press at the launch event. “The picture is stunning, and we are quite excited about our new flagship AQUOS 90-inch television.”

The AQUOS 90-inch TV may be large, but thanks to LED technology, it uses less than two 75-watt light bulbs, meaning that the electricity it uses will cost owners only about $28 per year, according to the company. Sharp is the only brand that offers the three biggest screen sizes for LED TVs at 70 inches, 80 inches and now 90 inches. Other LED manufacturers don’t go larger than 65 inches.

The picture quality is as impressive as its size, with a crisp 1080-pixel display. In addition to carrying Sharp’s propriety SmartCentral system — which allows for web browsing, Skype capability, built-in Wi-Fi and gives access to apps and on-demand services such as Netflix — it is 3D-capable and comes with two 3D glasses.
The AQUOS also comes with AquoMotion 240, which makes fast-action motions in sports or movies seamless without blurring.