Every year, enthusiasts and users from all over the world are focused to experience the next level of innovation and technology from a number of tech giants at the Worldwide Developers Conference. US handset and software behemoth Apple is always the pick of the eye when it comes to the launch of latest software features in its iconic iPhones, iPads, and MacBooks. 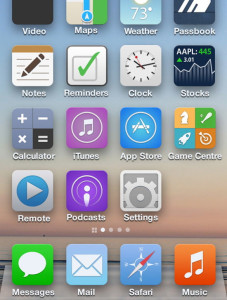 The Worldwide Developers Conference for 2015 will be held on June 8-12. 9to5Mac’s Mark Gurman has made a plethora of speculations regarding the Apple’s next big iPhone update.

Gurman is known for his accurate track record concerning Apple upcoming product announcements. In 2014, he disclosed images of the new Health app way ahead of the iOS 8 official launch.

As per Gurman claims, the variations that would be a part of the next iOS 9 would be:

Siri, OS personal assistant, is imminent to get a new design. Gurman mentions that the new face of Siri will make it look more like the colorful variant on the Apple Watch.

The report says that users are also going to get fresh wallpapers and color themes. iOS 9 will feature a blue and green color contrast by default.

A special emphasis is been given to the security features of the upcoming operating system. This step was taken following the flaws in the iCloud revealed at the end of 2014. In comparison to it, arch rival Google has been aggressively advertising its security optimizations in its Android OS.

iOS 9, however, won’t feature a plethora of new attributes but will certainly be more smooth and stable than before. Gurman had earlier claimed that the iOS 9 probably won’t come with major visual variations. Instead, Apple will focus on overall enhancements to stabilize and make the OS performance much better than its past experience. Apple will also make the update size a bit manageable so that the customers can install the updates more conveniently. The launch of iOS 8 in October saw some complaints regarding the space required for the installation of updates.

It is still very early to say anything more about the next OS version launch until the official update will likely to surface this autumn prior to the launch of next iconic iPhone. In the meantime, Apple is presumably developing an iOS 8.4 update that will feature a redesigned Music app to the iPhone.