South Korean smartphone heavyweight Samsung is aiming high of its latest flagship devices, the Galaxy S6 and Galaxy S6 Edge smartphones, and is optimistic that it will surpass the 70 million mark, taking over all its previous records. 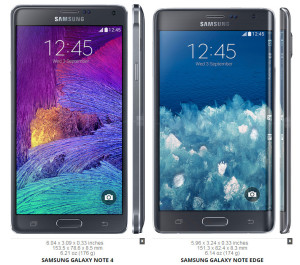 A claim by an unidentified Samsung executive reads that the Galaxy S6 and S6 Edge are extracting massive welcome from consumers all over the world and it will surely be a game changer for the company with the tag of “biggest sellers in the Galaxy series ever”.

Such as statement came just days after Samsung disclosure that the two handsets had been in great demand and surpassed their expectations. The sales statistics are far more encouraging than the company’s forecast.
This is certainly encouraging news for Samsung; however, the company has also shown its distress that the consumers must be facing some problems regarding these devices as the stocks might run out of devices.
But Samsung is pretty keen and focused to fulfill the ever-growing demands of its global customers by supplying ample amount of handset supply.
The fulfillment of 70 million of the Galaxy S6 and S6 Edge smartphones would see the company smashing its past records and would certainly come out as a front-runner in the run for superiority in the smartphone market.
Last year, Samsung came under severe criticism and anger of consumers due to its underperformance of Galaxy S5.
Market watchdog firm TrendForce highlighted last week that Samsung is leading the run in the global smartphone market during the first quarter of 2015 with a share of 27.8 percent in sales.

TrendForce also predicts that latest mainstream handsets Galaxy S6 and S6 Edge will further flourish Samsung’s market share in the upcoming second quarter.
The recent handsets from Samsung have a lot of creative improvements in component specs. The S6 Edge in particular has created a buzz among its contemporary rivals.
TrendForce also mentioned that in the same quarter, US handset maker and Samsung’s arch rival, Apple, has shipped 55 million smartphones thus managing to grab 19.9 percent of the market shares.