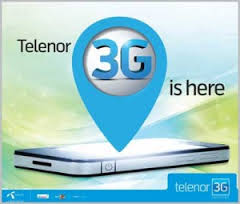 As we know that next generation licenses have been awarded to the respective cellular operators a couple of days ago, so Telenor Pakistan has decided to kick off its brand new 3G services commercially from June 1st, this ongoing year.

Following the footsteps of Ufone, who was the first operator to launch 3G facility to its consumer base from 24th of May, Telenor has now became the second network to offer these high-end services to its subscribers.
As per the speculations from authentic sources, the company will initially offer 3G connectivity in a couple of major destinations such as Lahore, Islamabad, Rawalpindi and Karachi.

Moreover, Telenor users were earlier enjoying the free test 3G drive, which is now going to be over. For this purpose, Telenor is going to inform its users that the trail version of 3G is going to last till May 31st, 2014.
Telenor is anticipated to reveal its 3G bundle offers by not earlier than May 31st.

For now, only Zong and Mobilink are the remaining 3G license possessors who haven’t disclosed their commercial release yet.

Meanwhile, Mobilink has been rumored to reveal its 3G services on commercial basis through the first half of next month. On the other hand, Zong is still dead silent to say anything about its 3G release. It should be noted that Zong hasn’t given any test 3G facility to its customers.

According to the speculations, Zong must be eyeing to come up with something special and like never before with its 3G license, but its consumers are curious to find out what Zong is been up to these days??